The Early Years
In the early years Duke played original Rock/R&B instrumentals, which featured their signature dual lead-guitar sound when Don Maracle joined in the band in 1974. The band was playing clubs in the Upstate NY area and gradually expanded their territory.

Two additional albums were recorded on the Mercury Record label, Taste the Night(1979), and Band in Blue (1980). Earl Jetty left the band in 1977 and was replaced by Dave Hanlon on drums. Earl died three years later due to a serious illness.

The Middle Years
The first major change occurred in 1980 when the band left Mercury Records after three albums and sought a more streamlined rock style. Dave Hanlon (Duke's 2nd drummer) and Don Maracle (guitar) went on to other ventures, and drummer Dave Corcoran joined the band. 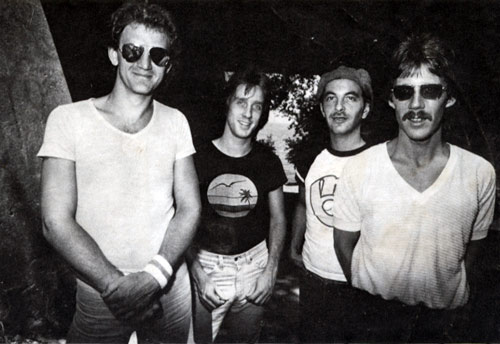 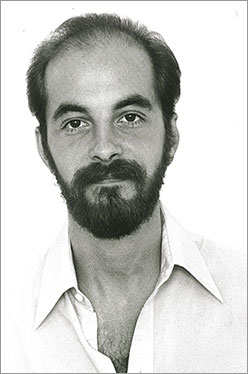 The band signed with CBS affiliate Coast to Coast and recorded two excellent records - the curiously named Duke Jupiter 1(considering it was their fourth album) and You Make it Look Easy.

Tragedy struck in early 1981 when bassist, George Barajas contracted a brain tumor!! After a very difficult year George died in August 1982. The band was in the midst of arranging and recording their 4th album. George was a brother—musically and spiritually—and an integral part of designing Duke's new 'stripped-down' sound—a huge loss was felt. Rickey Ellis came on board as bassist.

Duke's local popularity was huge by June of '82, when a record throng jammed Ontario Beach Park, causing what may have been the greatest traffic jam in the city of Rochester's history. 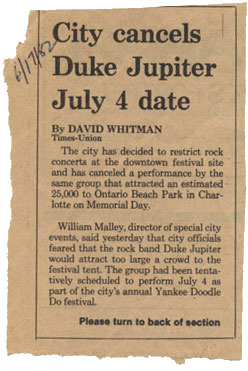 Some 5,000 fans were expected - but over 25,000 showed up. Traffic was so intense that police and fire officials called it a public hazard and banned Duke Jupiter from future, city-sponsored performances in Rochester. This was all over the local news, MTV news, etc. Some of the their best promo ever.

End of the Road...
After Coast to Coast Records went under, Peter Morticelli, the band's manager, got Duke a two-record deal with Morocco Records (a subsidiary of Motown). The first album, White Knuckle Ride(1984), had the break-out single, Little Lady,which they performed on Solid Gold; the video was popular on MTV; and the song was climbing the Billboard charts. The Morocco label folded, and Duke landed on the Motown label for their last album, The Line of Your Fire (1985). At this point in time, Motown had absolutely no interest in promoting a rock band.

After 13 years of touring, and worn down by the music business—Duke played a farewell concert in Rochester in 1986. Due to continuous popular demand throughout the years, they've had some memorable reunions. Their 2010 show was attended by 10,000 fans—24 years after they broke up. Amazing! The Duke legend lives on and continues to inspire young bands and musicians in the Rochester area to keep playing and making music the way they want to make it and to be proud of the day they joined a rock 'n' roll band.